Let's try and give our pets the love they deserve!

Hey, cat lovers! Is your feline’s chewy behavior getting out of hand?  Do your clothes look like they’ve been shot at close range with a machine gun?  Is your cat going tonto on the chair legs and ragging away at the side of the couch? Excessive chewing could mean your cat’s bored or a little anxious. But fear not, there’s an easy solution. Cats have a natural need to chew. This is how they behave in the wild.  What happens if you feel your cat is chewing more than seems necessary, though? Well, many cats settle down when given something to chew on and that’s where we’re here to help out today… To save your furniture and stop you from pulling your hair out in frustration, we’ve picked out 10 of the best cat chew toys on the market today. These innovative toys will send your kitty into chewy heaven while keeping their teeth free from plaque and tartar. Cats need their teeth regularly cleaned to prevent gum disease, but many cats can’t stand having this done. This is one of the primary benefits of cat chews toys as they help keeping teeth clean while your furball plays. We’ll round out with some handy hints to streamline your buying decision but we’ll get right down to business now with those reviews… 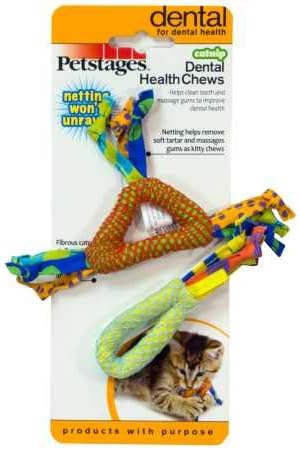 Rated:
 4/5
GET THE PRICE 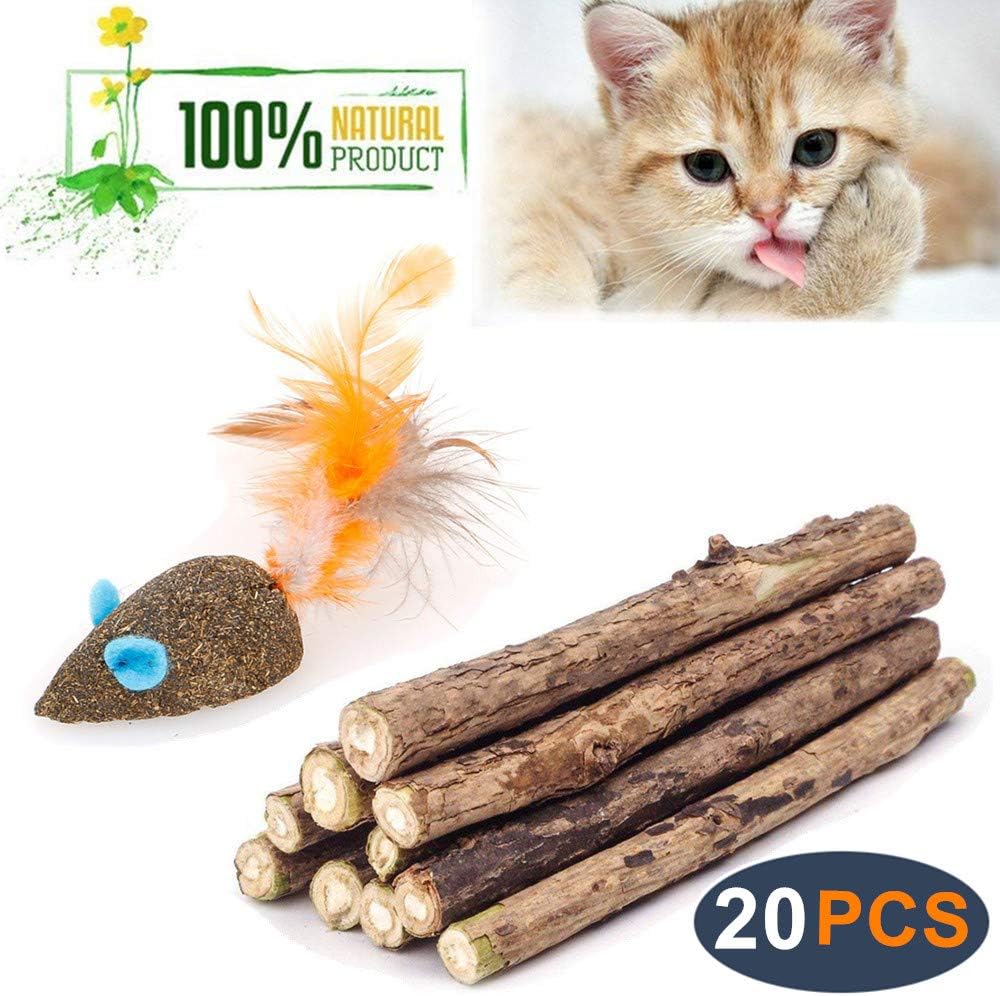 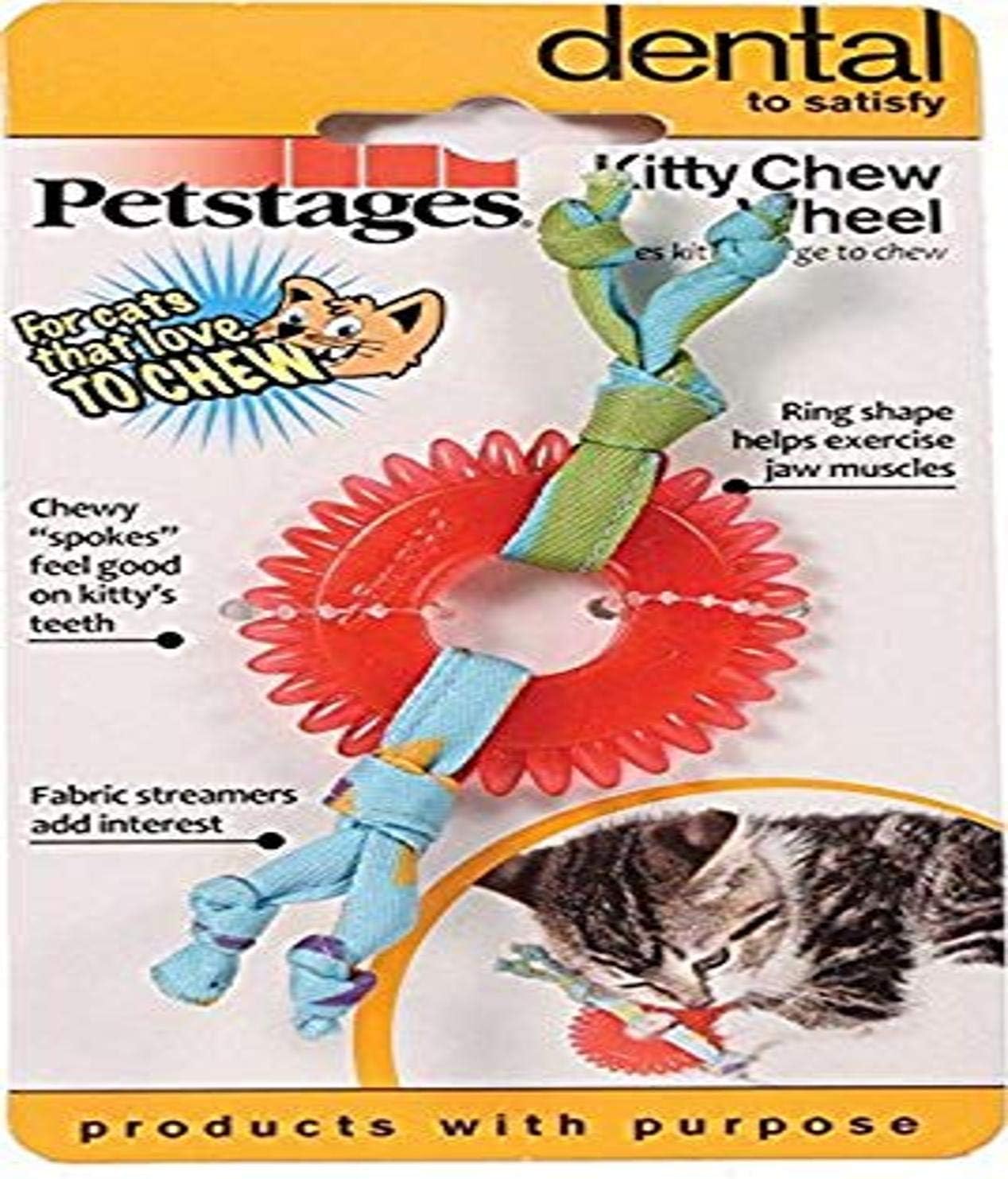 Alright! Now, let’s dive into the best product selection we researched for this topic.

Your kitty is sure to have some fun with these dental health chews. They’ll love getting their teeth into the fabric chew toys stuffed with a hit of catnip.

Since they’re made from such durable netting, any puss will have a hard time ripping these toys apart. The chews are soft on gums and teeth but tough on plaque and tartar.

If your cat prefers interactive toys, she’ll have a blast with the attached knotted streamers. Regular objects like shoelaces and wires won’t seem so tempting by comparison.

These 100% au naturel catnip sticks made from the wood of the silver vine plant (also called matatabi). If catnip doesn’t work on your cat, you might find these do.

As these chews are completely free of additives and preservatives, you can buy with a clear conscience. No recalls, no vet bills, no drama!

Chewing on these sticks of cat joy will keep your cat’s teeth fresh and clean as they slough off any plaque or tartar. They’ll also strengthen their gums. The chews are sized perfectly and just thin enough for them to wrap their tiny molars round.

Just peel a little bark to release the aroma, and watch them play, pat, lick, and chew all day long. 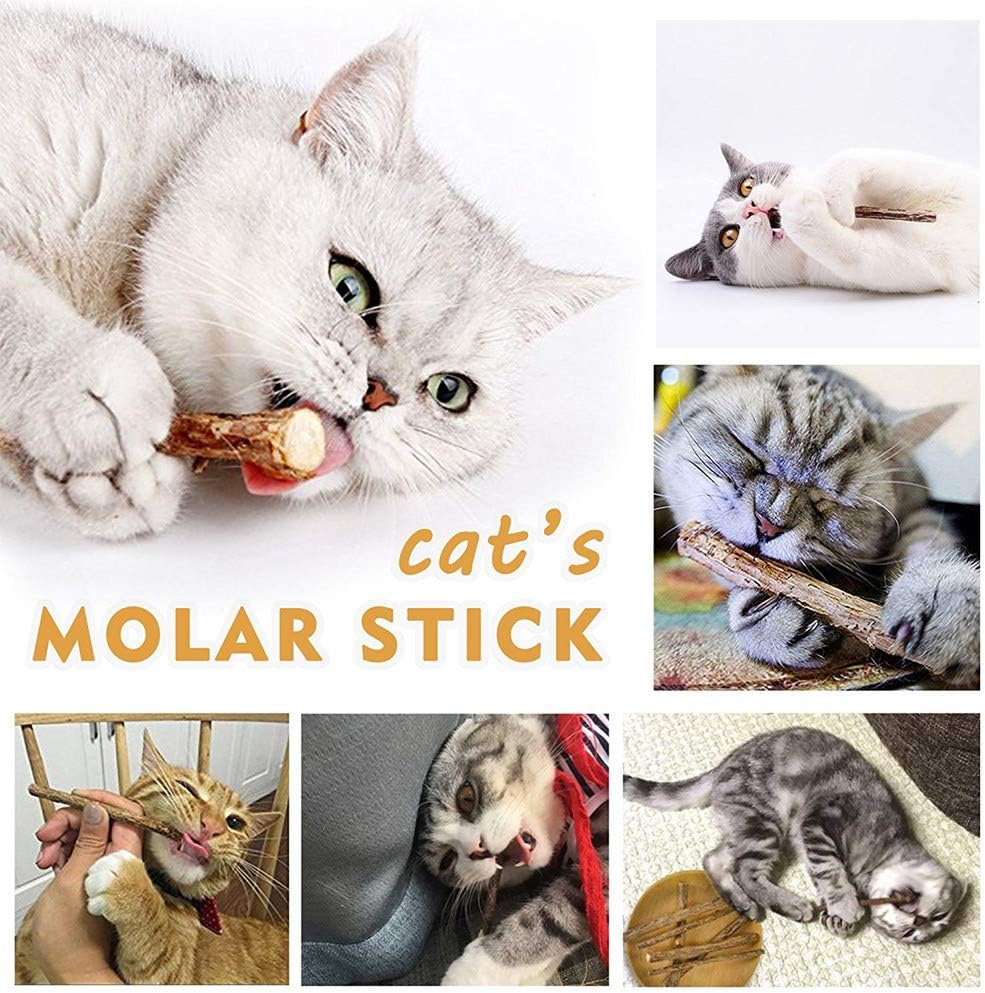 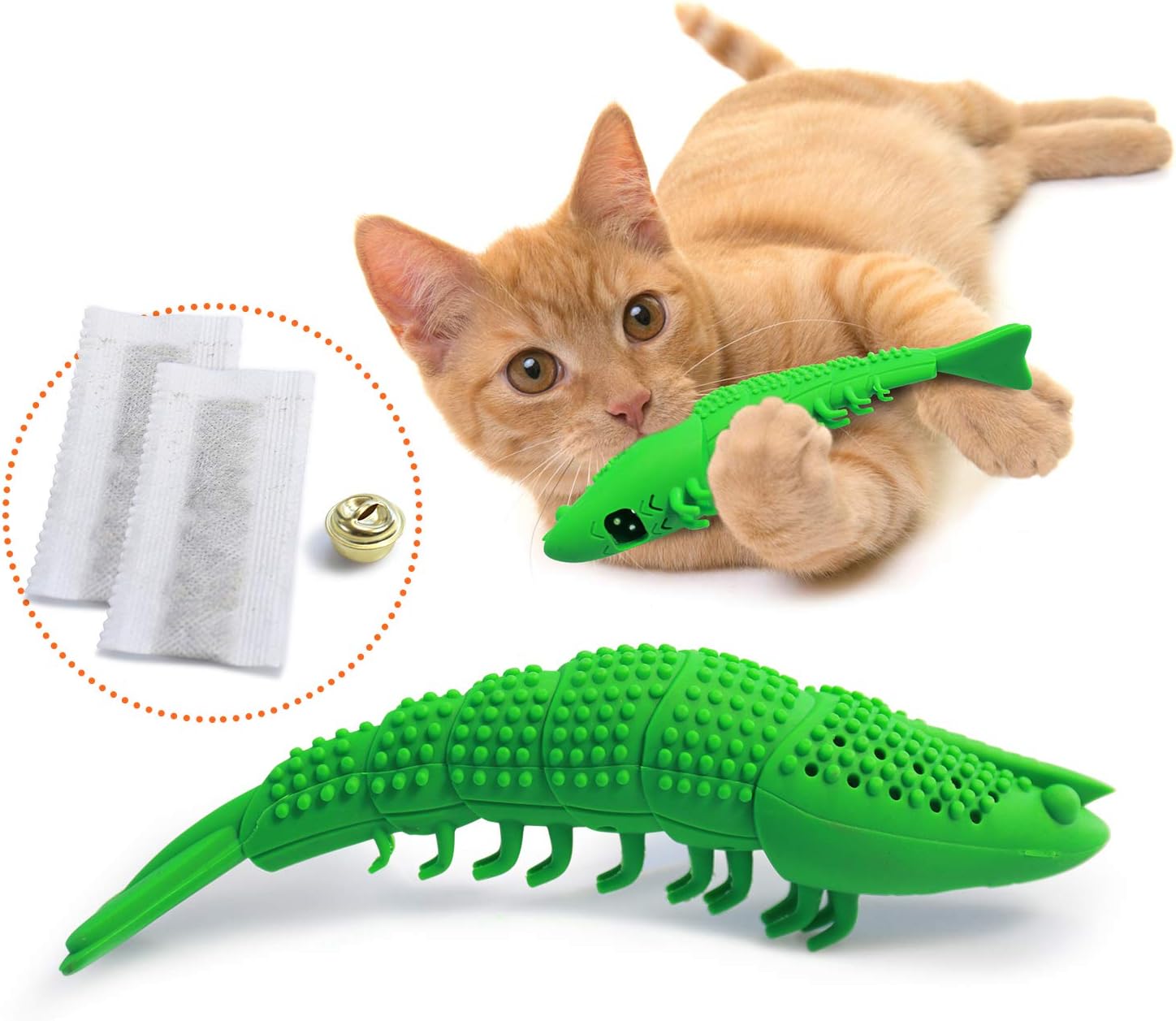 Let’s face it, no one likes going to the dentist, whether human or feline. But, 85% of cats suffer from some sort of dental disease. If she won’t tolerate you cleaning her teeth every day, what can you do to mitigate this?

This brightly colored cat toothbrush toy is the ultimate in stealth tooth brushing. Not only will your furball have hours of fun with this toothbrush, it’ll also eliminate plaque, bacteria, and foul breath. Textured non-toxic rubber cleans their teeth while giving them something hard to satisfy their chewing cravings.

As it’s shaped like a fish, this chew toy will bring out your cat’s inner tiger. Small enough to chew and carry but big enough that they won’t choke, sizing is spot-on. There’s also an enticing little bell inside. Watch the confusion set in as they start patting it.

If your cat loves catnip, they’ll go wild and start rolling around, jumping, purring, reclining, and generally having a ball.

Cleaning couldn’t be easier. Just disassemble the toy, wash it, put it back together again, and add fresh catnip. 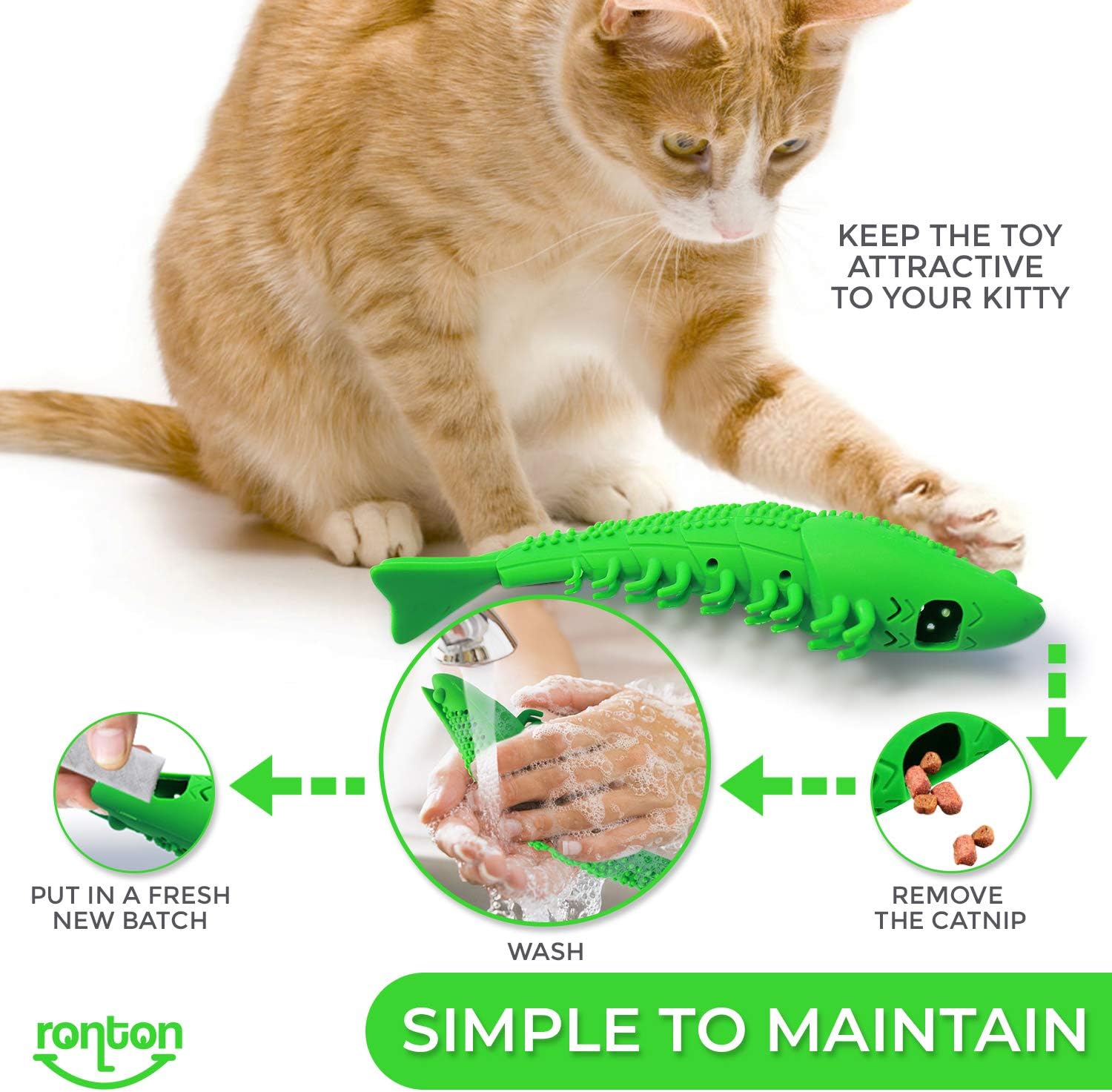 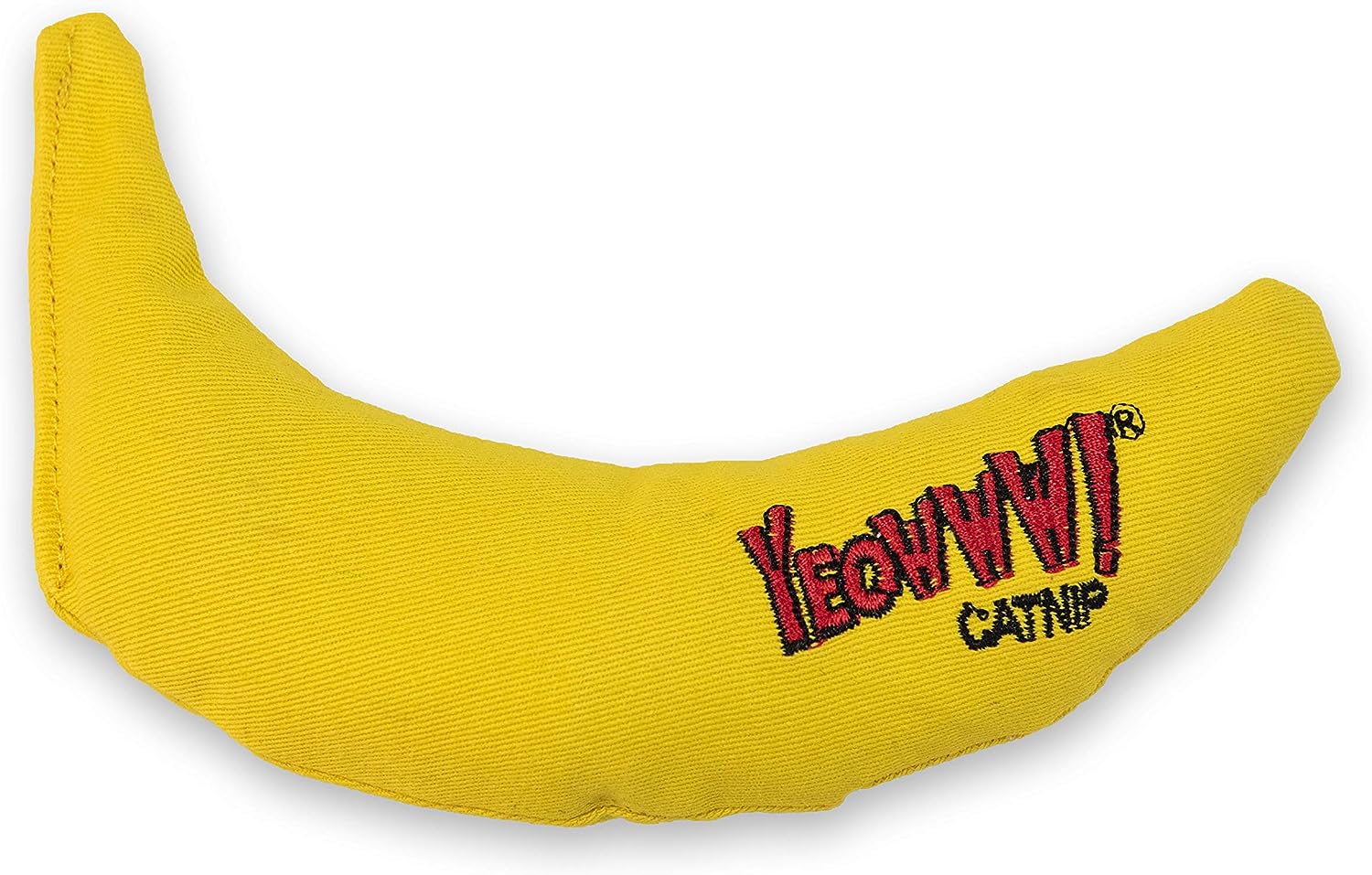 This bestseller will have your puss shouting Yeowww! in no time. Made with robust cotton twill fabric, it’s stuffed with an insane amount of nip. This bright banana will have them enraptured. Light and easy to carry, even a kitten can feel like the king of the jungle.

Cat’s can’t get enough of the Yeowww! chew toy as evidenced by the way this product flies off the shelves. 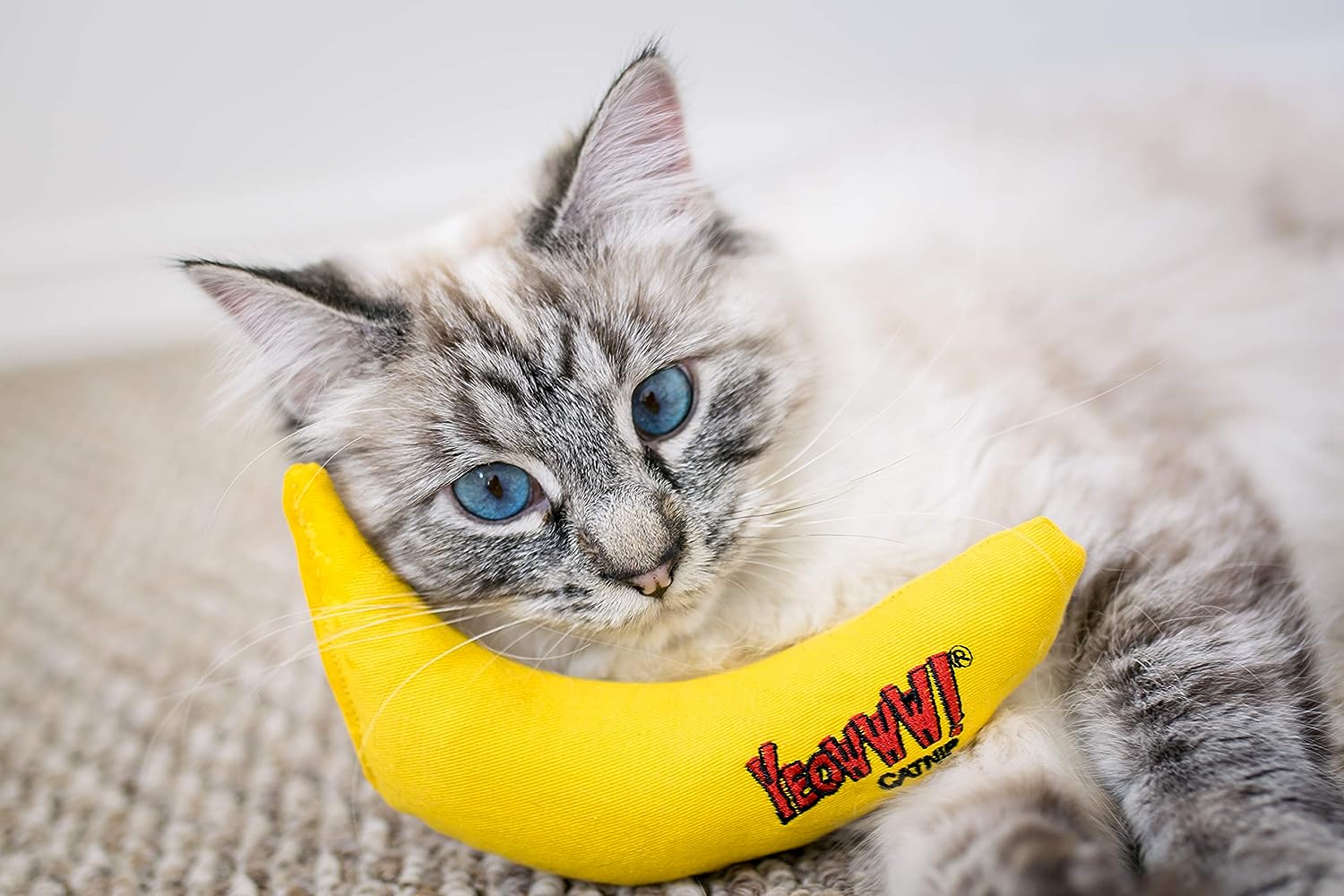 If your cat is particularly prone to biting, you’re hunting for some real chew action. This chew wheel has soft rounded spokes that’ll feel nice on your feline’s teeth.

They’ll love playing with the flappy fabric streamers during a chew session. You’ll have hours of fun watching your kitty hunt, tease, and pounce on their prey.

The chewy wheel helps to strengthen their teeth and jaws while preventing gum disease and tooth decay. 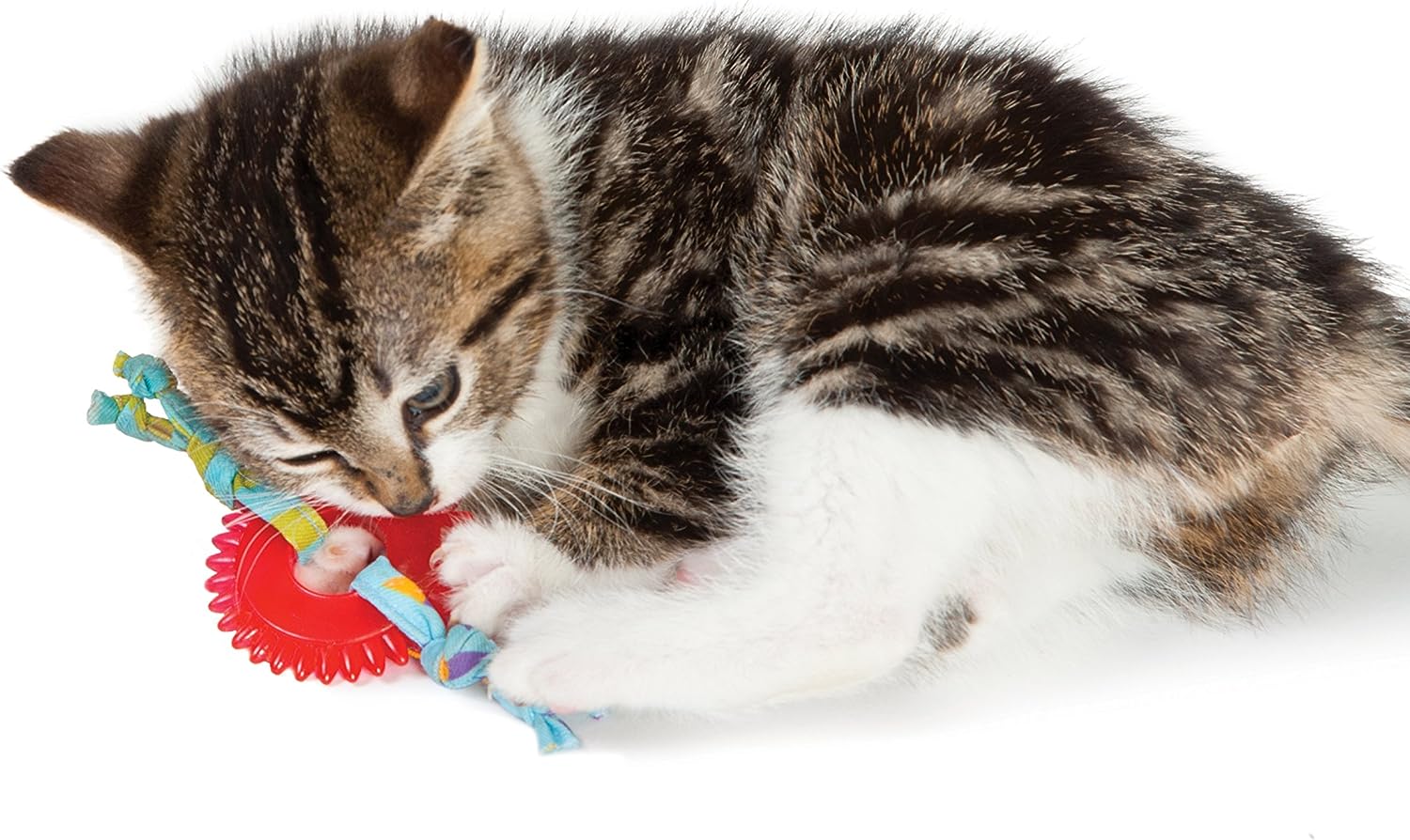 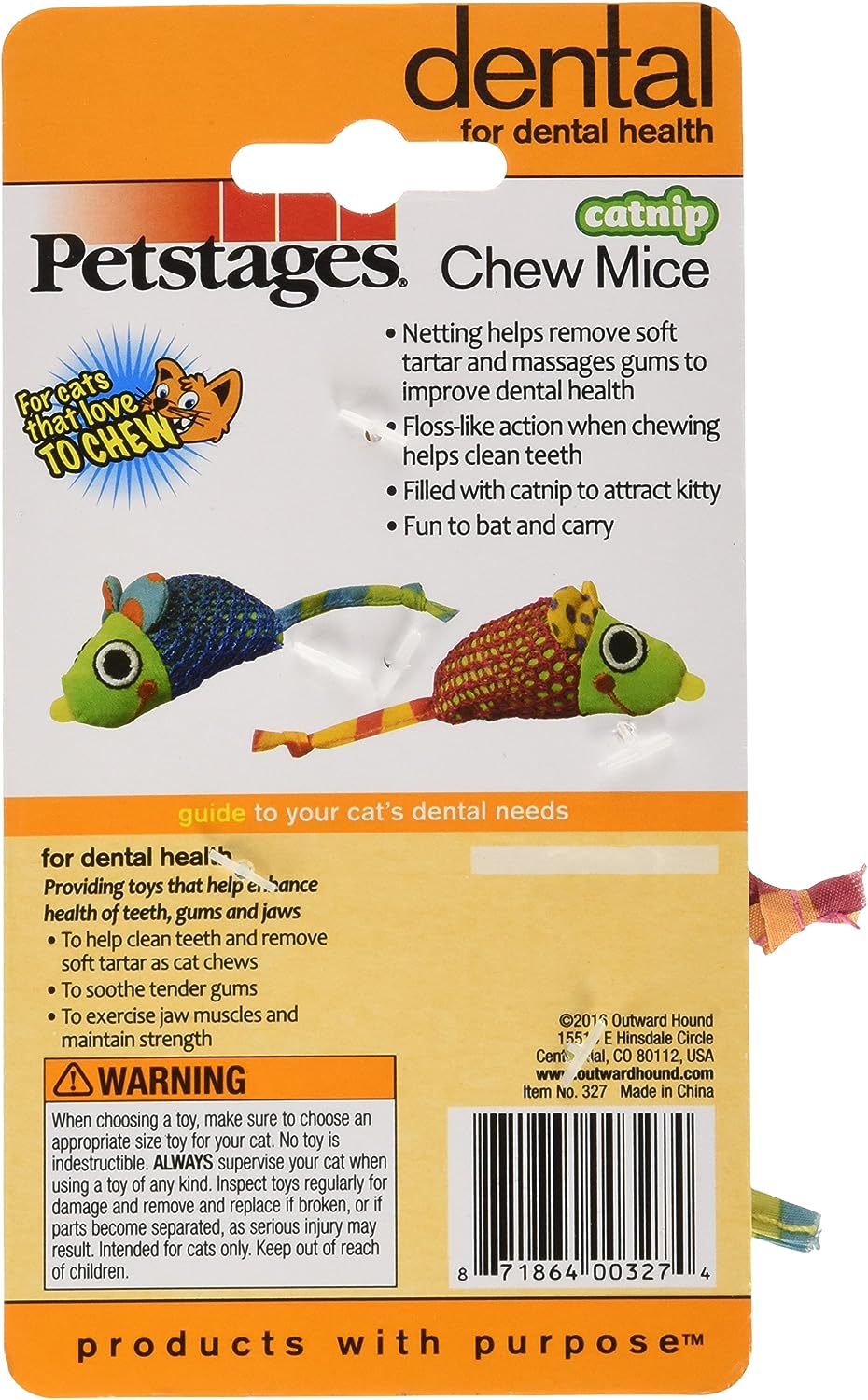 Your kitty will be all over Petstages Catnip Chew Mice. Made from hard-wearing netting, this acts to floss between their tiny teeth. They’ll also behave like a maniac for a while if they’re partial to a bit of nip!

Expect hours of entertainment as your cat behaves like a hunter on crack. They won’t be able to resist playing cat and mouse with these novelty mice.

These chewy toys are among the most fun on our list today so why not treat your cat? 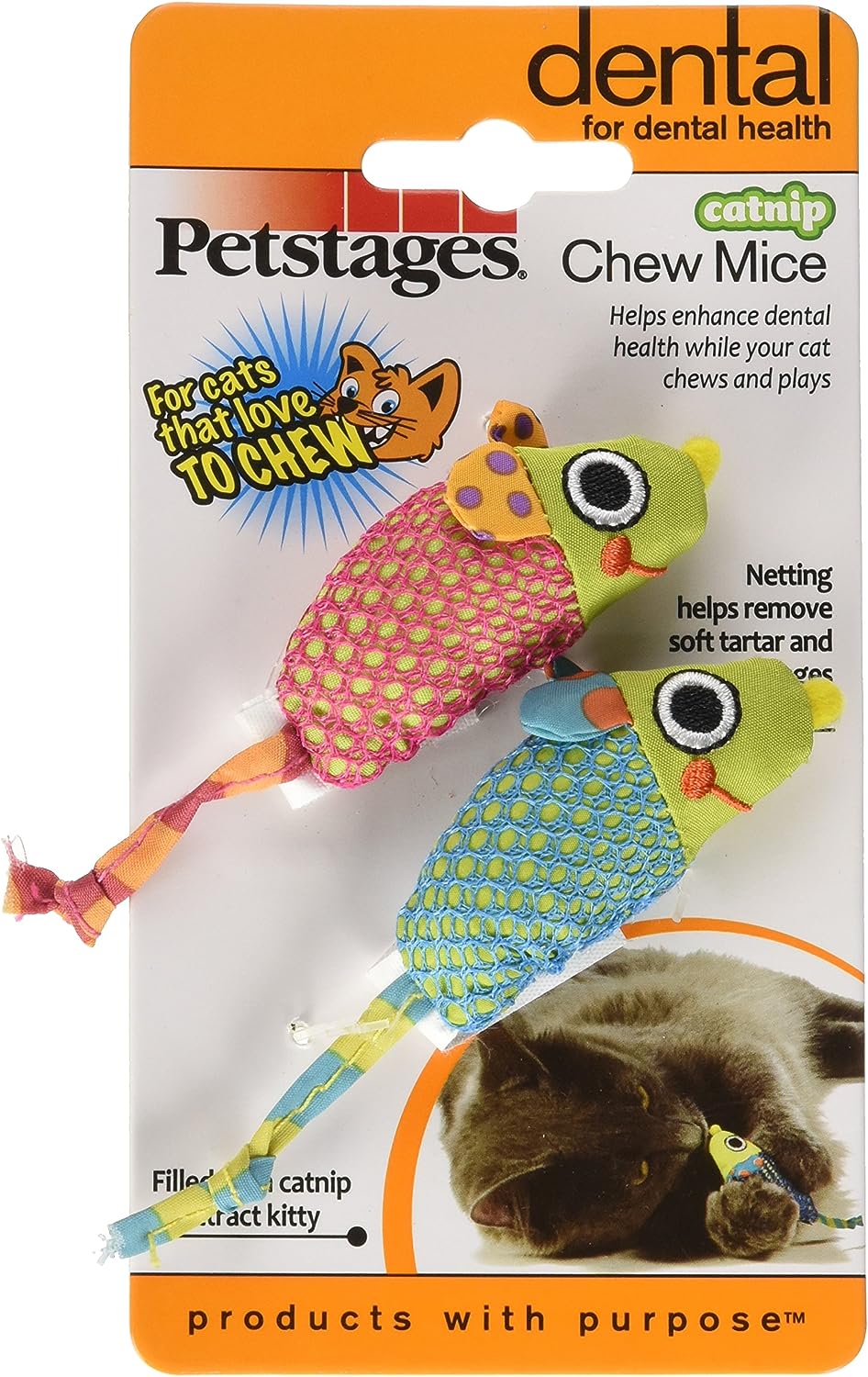 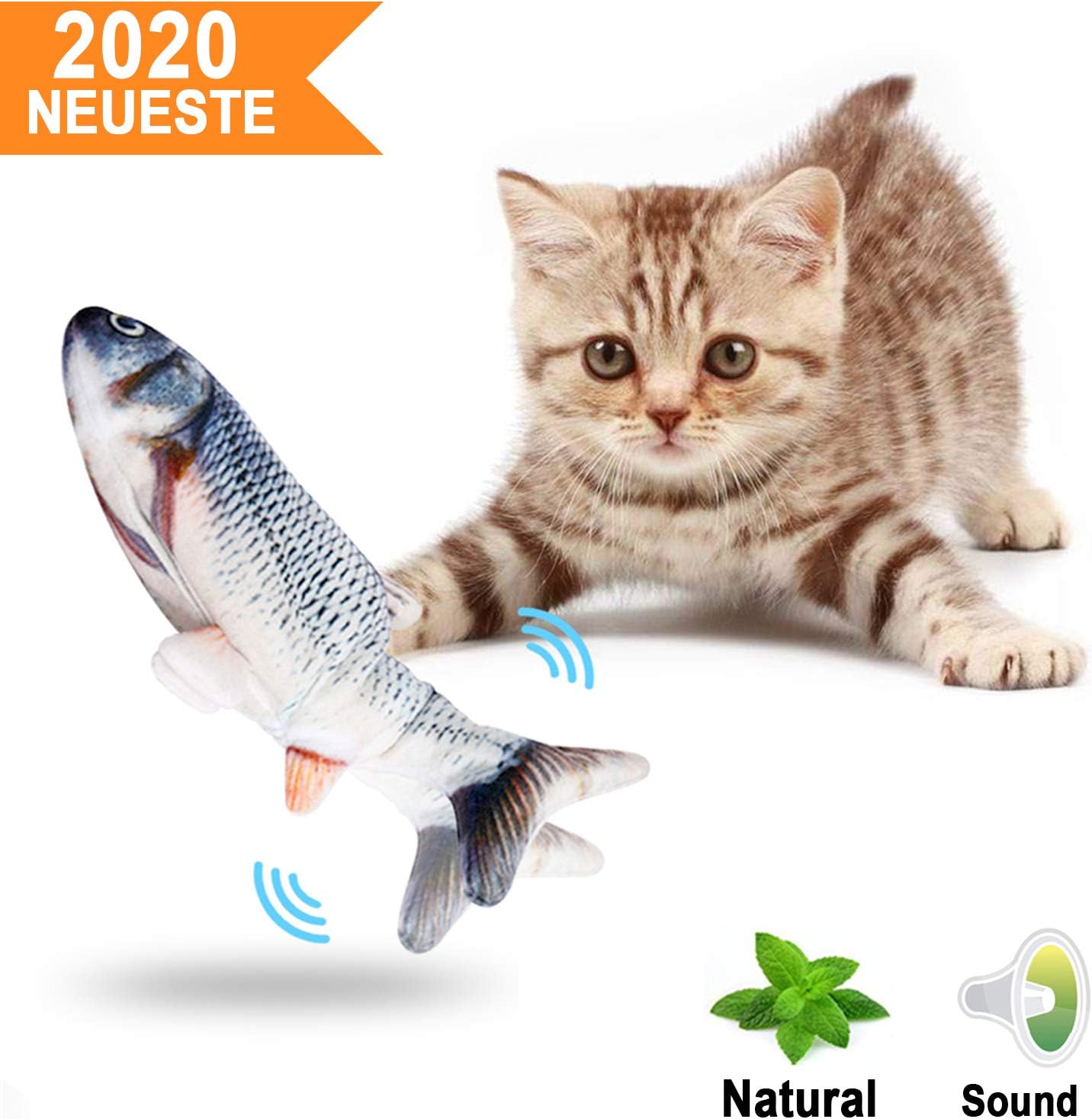 Why not spoil kitty with this realistic electric toy which flips and flaps just like a real fish?

Made from plush yet durable cotton, the Colorcasa fish chew toy can withstand some serious biting, chewing, bunny kicking, and pouncing.

Charge up your device by USB when it needs some juice. 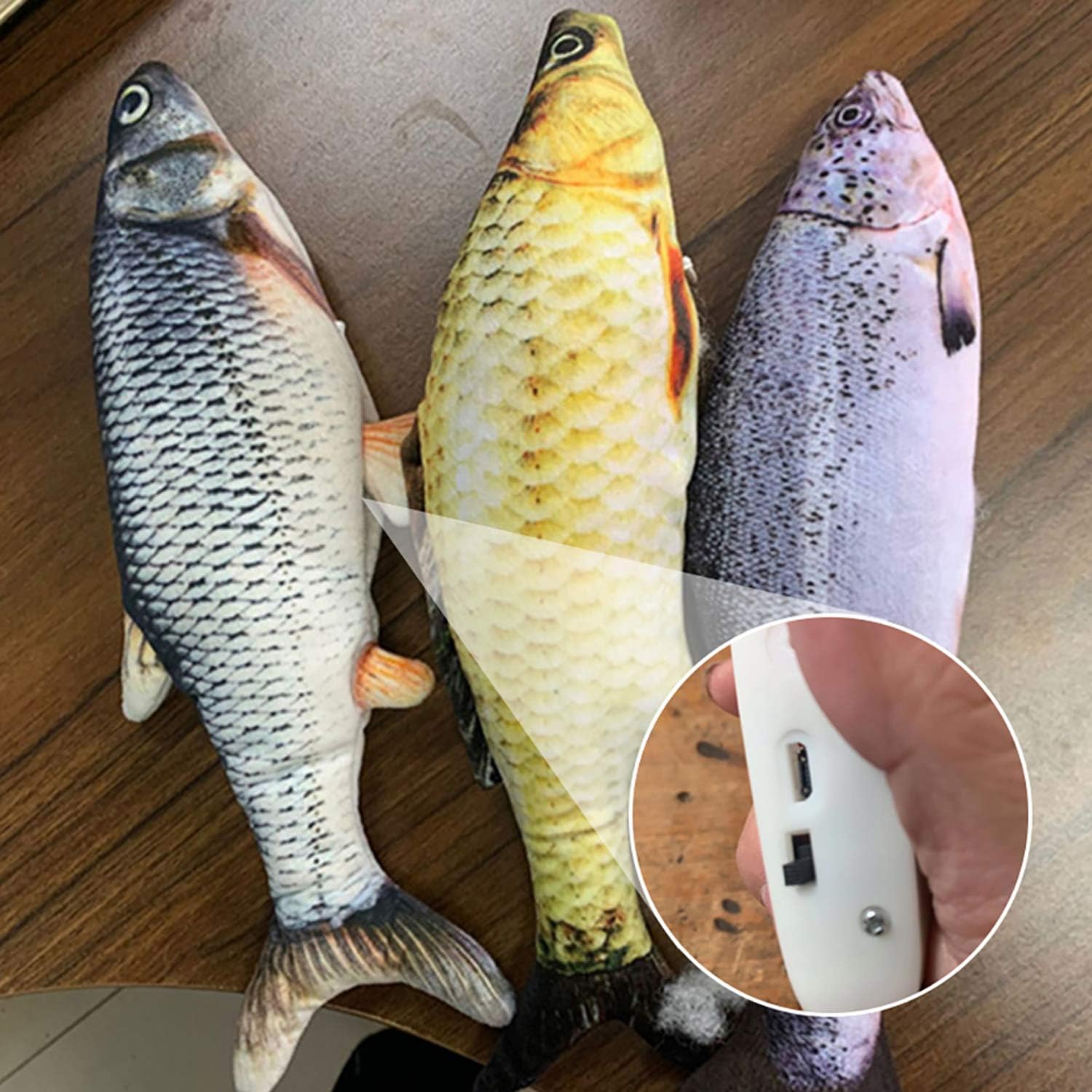 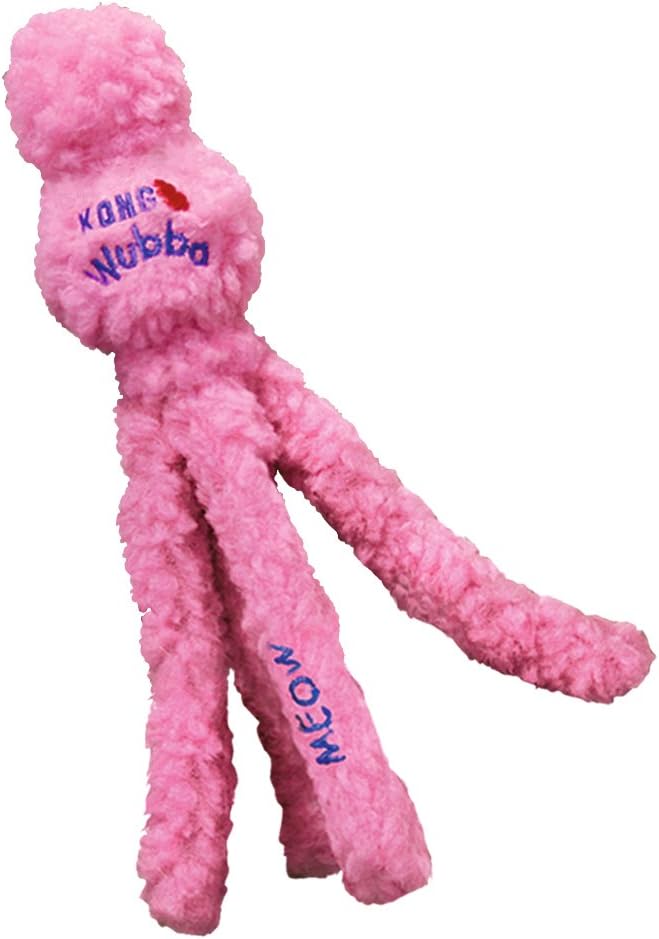 This fleecy plush chew toy by KONG makes all kinds of crazy noises, enough to spark the killer hunter instinct.

Kitty will be truly entranced by the bell and the crunchy noises. The striking pink design is enough to drive any normal cat into a playful frenzy. 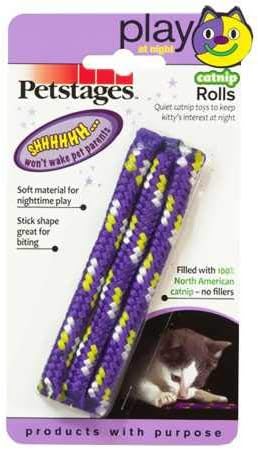 Is your cat’s playing keeping you awake at night? We’ve found just the thing that’ll let your kitty party on while you get a good night’s sleep.

Petstages Nighttime Catnip Rolls are completely silent. No bells, no whistles, and no crackling. Pure silence.

Shaped like sticks, they’re thin enough for any cat or kitten to gnaw on. Made of light fabric, you won’t hear a peep all night. 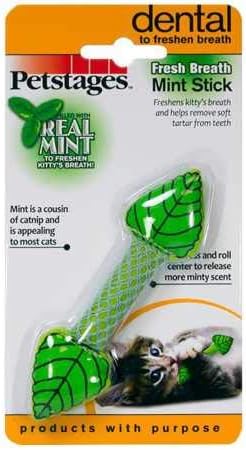 If your kitty has a touch of bad breath, the Fresh Breath Mint Stick will freshen them up in no time.

The central stem part of the toy is made with netted mesh material and stuffed with fresh mint. This material cleans plaque from their tiny teeth and flosses between them also.

While chewing is perfectly normal in cats, some can chew excessively which is not great when they start chewing wires and destroying your house.

So to satisfy their cravings and keep them safe, here are a few pointers on what you should look for when you’re buying cat chew toys.

Cat’s teeth are pretty sharp and do some damage. The last thing you need is a dash to the vet because your cat’s swallowed pieces of a toy that they demolished half an hour ago.

Also, you don’t want to throw money after money on toys that don’t last.

When you’re shopping for cat chew toys, always read plenty of user reviews. You can generally get a fairly accurate idea of a product based on testimony from real users.

If your cat has a particular penchant for chewing wires, clothes, shoes, and other household items, it might be because they are bored or anxious.

Entice them a chew toy with fun features such as mouse shapes, tassels, bells or rattles. They’ll be having such a party that they’ll forget about chewing up your home.

If your cat responds to catnip, there’s no better way to send them on the fun train for half an hour. Catnip is a perennial herb (grows all year), that when smelled by cats, triggers a reaction in their pheromones, which makes them act pretty odd. But, happily odd.

Cats might mellow out and go all sleepy or they could start making unusual noises, drooling, dart about the room and play up. If you suspect your cat’s a bit bored or off-weather, a little catnip will perk them up, well for a while anyway.

Catnip isn’t harmful to cats but just be aware that if you give them too much it might make them sick.

To avoid hefty dental bills with your vet, it’s crucial to keep your cat’s teeth free of plaque. Plaque build up leads to tartar which irritates the gums and causes gum disease. Cleaning your cat’s teeth daily or twice weekly might seem a bit of a challenge. But if you opt for chew toys with features that specifically aimed to clean their teeth, that’s half the battle won.

Textured hard rubber strengthens their jaws and gums while sloughing off plaque at the same time. Some toys are made of netted fabric, which are popular with cats because they can have a good bite while flossing and cleaning their teeth.

If your kitty loves to chew wires, it’s because she loves the texture. So distract her and give her some toys with a texture she can’t resist.

Some rubber toys have an interesting pimple texture that cats just love to chew on and get stuck in. Others are soft fabric, these can be equally enticing for kittens and cats alike.

Loved this article? Make sure to share it with your friends!

We hope you now have a solid overview of some of the best cat chew toys up for grabs.

Bookmark Pet Gear Zone and come back soon since we’ve got a busy content calendar lined up for the coming months. Our aim is simple: to make this site your go-to resource for all things pet-related. How are we doing so far? Feel free to contact us any time and let us know your thoughts.

Cat Paralysis Tick Home Treatment: A Guide To The Prevention of Tick Paralysis in Your Cat

Made with ❤ for Pets.